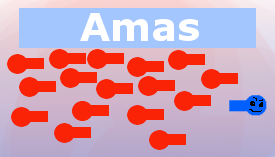 Amas.io is set in a 2-d colorful world where you fight and struggle to amass an army of tanks as you aim to take over the server.
Grow in power and number by killing others, as you increase your strength and power so too your enemies, they may seem weak at first but don't be fooled it won't be long before your outnumbered and outmatched.
Will you be able to maintain your Dominance? How long will it take for you to be defeated?
Amas.io is the inspiration to world renowned masterpiece that is Swaarm.io, it an astonishing work of art which shows a true meaning of life with its endless beauty and creativity, come play the old time classic that made Swaarm.io what it is.
Its easy to learn but hard to master, its a nonstop ever changing adventure that you won't ever want to put down.
The controls are simple:
Move your cursor to aim your army of tanks.
WASD or arrow keys to move.
Left click/Space bar to shoot.