Free For All
Agario Style 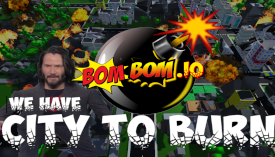 Bombom.io is a futuristic iogame. In Bombom.io you are the pilot of a vintage bomber plane and your job is to cause a much havok as possible. Navigatae above a beautifully rendered 3-D city and auto drop your bombs on all kinds of buildings. Your mission is to rocket up the leader board and defeat other players. You'll have to tactically ascertain the map and make strategic decisions which allow you to bomb as much as you can. Be careful to avoid bigger players, knocking into them will cause you to die and be reset. As you bomb and your points grow so will the size of your plane. The larger you become the more unweildly your ship is, this is a challenge which is suited to only the most skilled players. Yes you may be winning but this is an equalization mechanic that helps keep things on equal footing. Another cool thing about this game is that all of the other planes in the game are actually other players from around the world. Iogames are at their core MMO games where all of the opposing players aren't just simple computer controlled AI, but rather they are other people just like you. This makes competing against them far more difficult than outsmarting an algorithm. Do you think you have the skills, the smarts, and the will to overtake your opponenets, blast the city and become the ultimate bombom.io pilot? We believe in you, noww prove it!

The plane will be auto-bombing. Your responsibility is to steer it and avoid other players while scoping out high value targets. In order to do this you have multiple options for control:

The W,A,S,D keys will control the plane.

The Arrow Pad will control the plane.

Hold down the left mouse button to take control of the plane.

Hold down the right mouse button to take control of the plane.