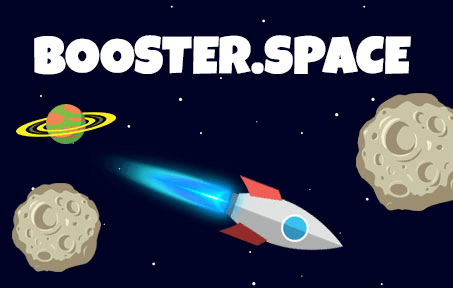 Booster.space is a space io game in which you try to level up and upgrade as fast as you can, without crashing into asteroids, or being killed by other players!

Collect fuel pods (red spinning circular objects) and use them to purchase new ships which unlock abilities and are faster, with more HP. Level up to upgrade your ship by spending points in different attributes, like radar, fire rate and health regen.

Use the mouse to control your ship's direction. Spacebar or right-click to move and left-click mouse to fire your laser. The abilities are hotkeyed to the number keys.

Watch the mini-map closely for incoming dangers. The laser won't destroy asteroids, so you'll have to maneuver around them.

Watch out! The faster you go, the harder your ship is to control. Don't forget to spend points in the "control" skill. Use your laser to destroy other players and asteroids. Go for fire rate and damage in the beginning, since it helps you destroy asteroids faster, which causes you to level up and upgrade faster.