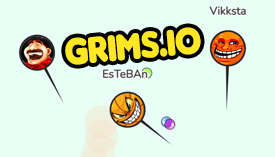 Grims.io is a free iogame. Grims is a multiplayer io game in which you must show off your fighting skills and be as arrogant as you like as you dominate your opponents in the arena. You move around the arena with an immense weapon that resembles a long sausage.... yes that's right!

Before you enter the arena you can customise your character and sausage - you can choose many different aspects such as hair style and skin color. The gameplay controls are simple once you enter the arena - use the mouse to control the directional movement of your character, and use the left mouse button to perform a dash. Try and kills as many opponents as possible and reign as the Grims champion!