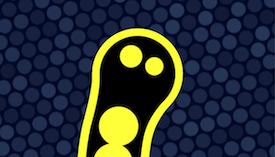 Gulper.io is a multiplayer racing game between snakes. Welcome to gulper.io, a new massively multiplayer online game, inspired by the classic snake and Tron lightcycles, but against real players this time! You play as a slithering snake-like creature, and your aim is to become the largest out there by collecting as many glowing orbs as possible, while avoiding clashes with competitors. Though you start small, you still have a chance to fight and win the biggest players using you skills. Be smart with your strategy, and become the best on the leaderboard! Game controls The controls are fairly simple: move mouse to change direction, and hold left mouse button or Space key to gain a speed boost. While in the accelerated mode, you gradually lose length, so use this ability wisely. The game is also adapted for mobile touchscreen devices. When you touch the screen, a joystick appears, after that you should slide to change movement direction. To move in accelerated mode, perform a successive tap and slide. Settings You can tweak certain game preferences in the dedicated menu, which appears when you click the gearwheel icon in the top right corner of the main screen. Particularly, in case your device is a low-end one, you can lower graphics quality and the framerate, which may help to make the game run smoother in some cases.