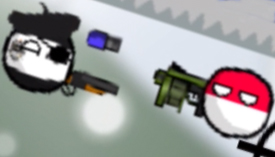 Kugeln.io is a 2d multiplayer shooter io game with power-ups. You have to fight to death on various maps together with up to 8 players.

There are three game modes:

Fight against everyone else on the map. You win by having the highest score.

There are two teams (red and blue) who fight each other. Don't try to kill your team mates! The team with the highest score wins!

Like Team Death Match, but you have to bring your enemies flag to your own one to capture it. The first team that has 3 captures wins!

Control your character with A/D and space to jump. You can aim with your mouse. Shoot with the left mouse button, and use the right one to throw a grapnel. Press E when you are close to a machine gun to use it. To reload your gun, you have to find that weapon on the map and pick it up again. And always have a look on your health!