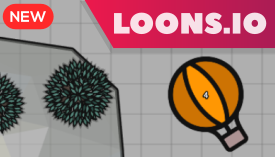 Loons.io is a silly io game where you take to the skies and pop the balloons of your opponents with your handy cactus gun.
Take coins from your defeated opponenet and use them to buy upgrades of all kind.
Build a might airship and rule the server!

Instructions:
Use WASD to move, SPACE to shoot, SHIFT to flip your loon around.
Use number keys (1 & 2) to switch between bombs and normal cacti.