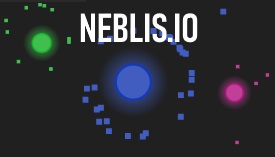 Neblis.io is a free-for-all space-themed io game where your goal is to grow and eliminate other players.

Join the Discord to discuss and give feedback!

In Neblis.io, you start out as a small orb tasked with collecting particles into your orbit to destroy other players and become the biggest! Absorb as many gray (neutral) particles as you can and use them to attack other player's cores. If another player's particles collide with your core, you will take damage. As you collect more particles, you will be able to start buying upgrades to improve your player's performance.

MOUSE - Move the mouse to direct your player

Score is an arbitrary number that increases for every action you make (pick up a gray dot, kill another player, etc.). If you are a small player, start out by trying to collect gray dots. A good method for getting a lot of particles is to dash inside a larger player's wall of dots and destroy their core from inside. You will take some damage, but if you are fast enough, you just might make it. It is a risky move of course, so be careful. If you are a larger player, your dots will start to decay as you get bigger, so you will have to start killing larger players to stay on top!

Server restarts every 24 hours, and you will be greeted with a warning 30 seconds in advance. Currently we have only one server, but we may expand in the future.

If you have any suggestions, bug reports, or questions, no matter how small, feel free to contact me at [email protected]. Thanks for playing!

For some reason you get really sucked into gatheringall these little dots, however I would love to see something that allows for us to beat even the really big players, maybe something involving the dash mechanics?

Yeah, I'm still working on balancing the game. I got the game featured for a day so I can observe players' interactions and figure out how to make the game more fair and fun :). This is my first game of course so I'm still really new to all this balancing stuff, but I'm working hard to make it better! Thanks for the feedback :)

When a large player (granted, it was only 300+) was attacking me, I was just able to dash through their wall and kill them from the inside. I don't know if this is because they were just a bad player, but it is possible to get 'em.
Log in or Register to Add a comment
Featured Until:
Monday, December 24, 2018 - 21:30