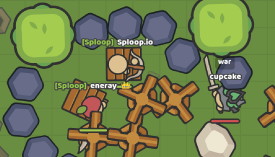 Ninja.io is a 2D multiplayer ninja fighter io game. You are a Ninja warrior with a diversity of weapons at your disposal. Use your moves and weapons to the best of your ability to defeat the other players. Battles take place in an ever-growing diversity of maps. Players and other objects are subjected to the laws of physics, making every kill and every action truly unique.

How to Play Ninja.io

Press 'H' in game to display the help menu containing all the keyboard commands / controls.
In addition, you can switch between Azerty and Qwerty keyboard and mute the audio.

Try to use the laws of physics to your advantage!
Shooting down from a position above your enemy will increase the energy of your projectiles, making them more lethal. Gravity hurts!
Grenades, RPG rockets and other projectiles can be deflected by direct hits.
Seek cover behind objects and barriers, but keep in mind that the shockwave of explosions can pass through many obstacles.
Aim for the head! Direct hits on specific body parts like the head or torso will do more damage than hits on limbs.
Use teleportation gates, moving platforms and trampolines to your advantage.
Above all, keep track of new developments! Ninja.io is a work in progress.