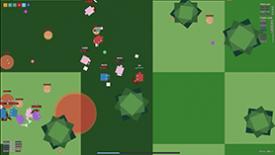 Goldcub.io is a multiplayer team-based game. Fight with other teams, collect gold, level up your base and player.

Kill monsters or other players to reach lvl and get upgrade points.

When you take cart, you can collect gold on ground and take them to the base

When there is enough gold on the base, it improves and gives bonuses for the whole team

With cart you can steal gold from enemy team base

When the base does not have gold, it can be destroyed. Last standing team wins.

Each class have his own base stats and special ability