Paper Racer
56
Vote up!
Vote down! 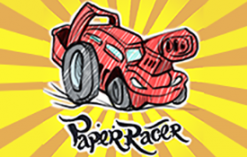 Paper Racer is a cute racing io game with paper designs. Strap in for extreme racing: paper style. Don't let the hand drawn graphics fool you, this racing game has a lot more under the hood than most.
Paper Racer features custom tracks designed by other players from around the world, it also gives you the option to build, upgrade and share your own custom tracks.
You can race on thousands of tracks which are drawn by other players within the game! Most racing games stick you in a static, stock car, but not Paper Racer.
In Paper Racer you can customize everything! Play alone, against the computer or go head to head with a friend on one of the thousands of user generated race tracks.
Whether you decide to play campaign, solo, or challenge a friendm Paper Racer truly has everything you could ever want in a racing game.

Features:
- 6 different vehicles, including monster truck, motor cycle, and Race Car.
- Teleporters, guns, changes in gravity!
- Cartoon animation
- Over 100 campaign tracks in various environments and locations
- Play against people all over the world
- The ability to draw your own tracks and vehicles, which can be shared with other players