Free For All
Classic
Ocean 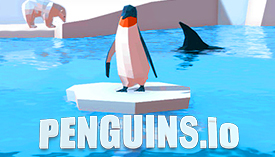 Penguins.io is an awesome bumping io game! The little penguins began to have new fun. They crowded with each other to see who could get to the end of the ice. Penguins.io is an addictive game where you control a small penguin fighting on an iceberg. Your objective will be to push all of the other penguins off. If you become the last surviving penguin, you win. It’s sort of an icy battle royale. The one who survives last wins. The iceberg will be getting smaller and smaller as individual pieces will begin to fall off. That’s why it’ll become increasingly difficult to defend against enemy attacks and to survive. You have no other chance than to attack first. All you need to do is point your penguin in the right direction and load up as much strength as you can. This way you can launch off more opponents at once.