Free For All
Shooter 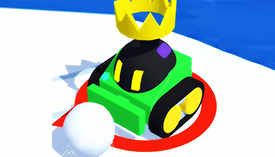 SnowWar.io is multiplayer king of the ring style game with snowballs! Snow Wars.io is a fun multiplayer fighting game in which you must compete in an epic snow fight! You control a single character and must gather snow into a ball and launch it at your opponents to try and eliminate them. At the same time you must also try and avoid being hit by snowballs otherwise you will be destroyed!

Make big snow balls and roll them into your opponents to knock them out. You can make a giant snow ball in this multplayer game!

How to play:
•WASD to move Release keys to throw the snowball