Power-ups
Free For All
Asteroids 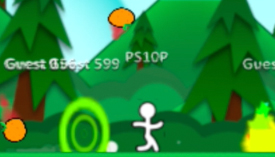 Tangies.io is an avoider game. This is a simple stick game where you will compete against other players from around the world to avoid the plague of asteroids smashing your planet. Run back and forth from the sides of the screen and try to not get smashed by the falling asteroids. You cannot interact with the other players nor can you interfere with them but you can see them as ethereal ghosts. Even though there is no direct interaction you will still be competing with opposing players for the limited amount of resources that drop from the sky. There are a variety of upgrades that fall from the sky. You can get shields, energy, fireball, and invisibility. All of these upgrades last for a limited amount of time but will help you to remain alive as long as you are playing the game. The game is over when all players have died except for one. This player will become the winner and gain points based on how long they managed to survive.

How to Play:
Use your mouse to move back and forth across the screen. Use the left mouse button to jump. Jumping allows you to move farther and faster, however, it also launches you up into the sky where the asteroids are, please use with caution. You can gain upgrades by being the first player to move over them after they have dropped nto the arena.