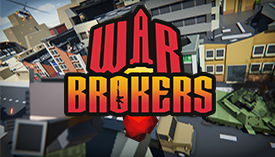 War Brokers is a free iogame. Welcome to the deadly world of WarBrokers.io In this game, you will be pitted against a whole arena full of other players from around the world who are dead set on picking up arms and destroying you. But it won't just be guns, knives, or rocket launchers. In Waarbrokers.io you can also hop in a tank, a jeep, a jet plane, a helicopter, and other kinds of deadly vehicles. A sniper rifle might make you feel safe as you hide 5 stories up and try to pick out targets, but now consider that there might be a harrier jet hovering 5 floors above you with heat-seeking missiles trained on you as you try to line up a shot. It's scary, it'll keep you on your toes: But that is Warbrokers.io It is a game that will make you a better gamer for having played it. Don't be fooled by the cute bit-pixel style animations. The emotionless faces of your opponents may seem strange and adorable until you catch a glimpse of one of them emotionlessly cutting you down with an AK47. That is right. Warbrokers.io is a fast-paced, first-person, 3D shooter focused on fun and tactical choices. Players start on an equal footing with access to all weapons and vehicles. A player's skill and tactical choices will win the day. do you have what it takes to rise above it all and become the conquering hero or will you be trampled underfoot by a Sherman tank? You won't know till you try and trying is half the fun.

Weapons are selected by pressing a number.

Press M for the Main Menu, where you set primary and secondary weapons.

In the Settings menu, chose Quick Help to show your weapons loadout during the game.

SHIFT - Hold breath to steady your scope while it is zoomed.

N - Shows the whole map from a top down view.

0 - The zero key on the top of the keyboard will toggle the Frame Per Second (FPS) display.

Move side to side as you drop to make yourself more difficult target for your opponent.

The Default Spawn option will immediately spawn you on the ground within the area of your spawn zone. The benefit is you will be
invulnerable for 10 seconds.

A player's healthbar color is purple while in an invulnerable state.

W - Glide forward at a medium speed while dropping.

S - Slows you down and drops you fast in one spot.

A - Strafes you left.

Mouse - Use your mouse to control your turn.

Q - Launch 1 flare to help avoid being hit by a homing missile. Reloading time is 45 seconds, and you have 3 flares.

Mouse Up - Pitch nose up. (Can invert this in the settings.)

Mouse Down - Pitch nose down. (Can invert this in Settings)

Q - Flares. Launch flares to help you avoid being hit by a homing missile. You have three flares. Reloading time is 45 seconds.

Mouse Forward - Pitch nose down. (Can invert this in Settings.)

Mouse Back - Pitch nose up. (Can invert this in Settings.)

2 - Air to air homing missiles. Aim at target and fire when a lock is acquired.

Gameplay Tip - In the Settings menu, adjust the Jet sensitivity slider so you can turn fast. For the fastest turning, roll the jet 90 degrees, and then pull down on the mouse to pitch the nose up. This is a much better method than using A/D as your primary method of turning the jet.

Each weapon has different characteristics in terms of range, damage, clip size, fire rate, etc. Try each to discover which works best for you.

Headshots inflict twice the damage as a hit to the body.

Machine Guns - The AR, AK, SMG and VSS pull up when firing. To maintain your aim on an opponent, pull down slightly on the mouse.

Sniper - To hit an opponent with the sniper rifle, you have to adjust your aim for the bullet drop as it travels across the map. Use the lines above the crosshairs to measure the opponent's distance. Line the middle crosshair at a player’s feet, and note the distance marker at top of their head. If the player’s distance is at the 200 mark, line up the 200 mark below the crosshair on the center of the opponent’s head.

Grenade - Press fire to cook an explosive grenade, and release fire to throw it. A grenade will explode 5 seconds after pressing the LEFT Mouse button. Watch the circle timer on the screen.

Smoke Grenades - Use these for cover to temporarily hide from an opponent.

Air Strike - Aim at a point and press the LEFT Mouse button to fire. Bombs will rain down on that point after a couple seconds. Good for stopping a point from being captured or a difficult opponent's vehicle. RPG - Best for use against vehicles. It is unguided, but does more damage to tanks and APCs than the homing missile. Homing Missile - This Guided missile will lock onto and track a vehicle until it hits or runs out of fuel. Missiles can be avoided if the vehicle moves quickly, or if a jet or helicopter uses flares. Minigun - Designed as an effective anti-vehicle gun, but can be used against foot soldiers. -------------------------------------------

GAME MODE OBJECTIVES Team Deathmatch: Work with your team to score the most kills before the timer ends.

Package Retrieval: A diplomat’s airplane is shot out of the sky, and his important papers are parachuting down. Grab the suitcase by pressing F, and deliver it to your drop off point. The drop off point is a flashing green circle in your spawn area. Just be aware your opponent is trying to get those top secret files first so you need to be quick!

Team Capture Point: Defeat your opponent's to lower their flag and raise your own. Stand within the green circle that surrounds a flag pole, and the flag will raise or lower on its own.

Missile Launch: One team is tasked with raising three missiles, and the other team is tasked with preventing their launch. Missiles are marked on the map by green circles. As a missile is being raised the circle will flash red. Once the missile is launched, this circle will be solid red. Missiles are raised by standing next to it while pressing the F key. A partially raised missile will slowly lower back by itself, but if you are on the defending team, you can lower the missile quickly by standing next to it while pressing the F key. The first missile takes 25 seconds to rise, the second 20 seconds, and the final one 15 seconds. Players cannot choose a parachute point within 100 meters of a missile launcher.

Vehicle Escort: Each team has a turn to see which can move the tank the furthest. The tank cannot be destroyed. It only takes one teammate standing near the tank to move it forward. Protect this teammate as your opponents try stopping him from escorting the tank to its destination!

S - Slow your free fall and drop in one spot.

A - Strafes you left slightly in free fall.

F - Opens your parachute. If F is not pressed, the parachute opens automatically before you reach the ground.

S - Stall your parachute and drop straight down.

Mouse - Look around to see where others are parachuting.

N - Shows the whole map from a top down view.

F - Press F to pick up items on the ground.