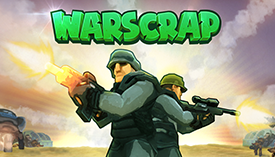 WarScarp.io is a team-based tower defense io game with 3D graphics. Mine resources, gear up, and prepare for epic base defense battles in this free to play, co-op multiplayer third-person shooter, 3D .io Game!

Game Updates & Patch Notes:
version v4.2 - NEW JEEP!! -- New look. This will be the look of all human vehicles coming in the future -- New jeep driving mechanics -- Turret now rotates 360 degrees -- Fixed bug where people would get stuck in seats -- Fixed bug where people would become invisible forever if they were in the jeeo -- Fixed bug where hitting bots with the jeep would make it flip over - AI -- Robots now leave back to orbit if they win the base raid -- Robots now can only shoot where they are looking, this should stop them from shooting out their butts -- Robots no longer aim at your toes when shooting at you - Network -- Graphics -- Game got a major graphics update. Everything should looke way better -- Graphics options now added to the Pause menu if you want to drop quality for better FPS on older PC