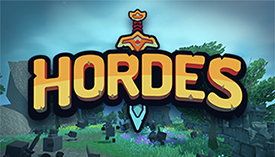 Hordes.io is team-based io game where you're fighting against zombies with everything from magic to cannons. It's one of the more unique games we feature, initially a massive different is its 3d aspect and game play, you wander around this 3d environment and aim to defeat monsters either solo or by teaming up with other players around the map.

In proper mmo fashion you are given the choice between 4 starting classes, these are warrior(tank), ranger(ranged damage), mage(ranged damage) and a healer(support) you start off in a safe area of the map surrounded by high level npc guards and other players. Your job as an adventurer is to rid the world of the evil npcs that spawn around the surrounding area and gain experience in order to unlock new abilities and become stronger. As you become stronger you still find the lower levelled enemies die very quickly, as you head further north you’ll find bigger and badder enemies that will be more challenging.(giving more experience respectively) You need to fight together with other players in order to mow down the endless horde of enemies and earn gold.

Your character is controlled by using the WASD keys, your mouse can be used to turn the camera and also to select enemies/allies to attack/assist. Lastly your abilities are located on the keys 1-4 but everything can be rebound to different kills once you’re in game!

Game Updates & Patch Notes:
Patch 0.26.3301 - Jan 03, 2020 First update of 2020! This patch fixes general issues by removing /die and replacing it with a skill that can be cast over time. Many spots in Faivel have been fixed, and VG received an additional spawn, as well as some pathing advantages. Fixed a pretty bad bug that affected every situation whenever any target died, includign fame, gold and loot amount. Summon: new casting sound, new particle effects, new skill color Summon: after accepting a summon, members receive a buff: Recall Shift - a short movement boost to promote interesting PVP charge attacks Summon: no longer summons member closer than 12m to the caster New default skill: Conjurers Recall - teleports you to the nearest conjurer. cant be used in combat, has a casting time and a cooldown Conjurers Recall: Also applies Recall Shift Removed /die
Patch 0.26.3093 - Nov 24, 2019 - Spirit Animal: Increased mana cost by ~50% - Decay: Reduced mana cost by ~25% - Mend: Raised base mana cost by 4 MP - Revitalize: Reduced cast time from 2s -> 1.8s, reduced mana cost by ~20% - Healing Totem: Raised cast time from 2s -> 2.3s - Mimirs Well: Only lasts 60s -> 15s. Now generates mana two timers per second, increased generated amount by ~800% - Agonize: Raised cast time from 2s -> 2.3s. Reduced active time by 10%-30% - Added number display for incoming damage / healing / MP received by you - Added casting bars to the HUD showing you when players around you are casting - You can now change targets while casting without interrupting your cast - Healing someone who is in combat will now force you into combat for the same duration - Increased the amount of HP rewarded by chest armor by ~100% - Increased the amount of HP rewarded by rings by ~30% - Inceased the amount of MP and MP reg./5 rewarded by amulets by ~40% - Wisom no longer grants MP reg./5, instead it now grants Max MP - Improved main menu page - Improved colors of the HUD, text readability - Sudden death timer in arena now starts 10 seconds later - Arena auto regen will now stop 10 seconds before the start of the fight - Fixed a bug causing party members to be displayed as enemies on the map
Log in or Register to Discuss this game
Featured Until:
Sunday, January 19, 2020 - 17:07