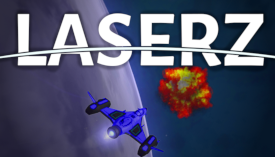 Laserz.io is a free iogame. Welcome to the height of gaming, Laserz.io is an online multiplayer space shooter game. You switch into the role of a space fighter pilot and need to fight for your team. But be prepared, other players will try to shoot you! You can play different game modes either in FFA, or in private matches together with friends. Just send them the link to your match and create a great team.

Every ship is equipped with a powerful laser that allows you to shoot other players and AIs, like patrols which are guarding stations. You can equip better weapon by shooting powerups that spawn everywhere in space.

Create an account to save your progress. For every match that you complete you will get XP. You will get higher ranks over time, which are visible next to your name. Show other players who the best player is! You can reach the following ranks:

And maybe more? Show your friends how well you can fly spaceships!