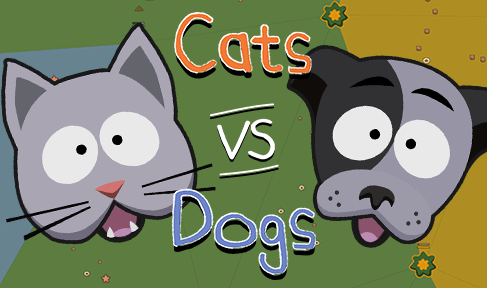 CatsVsDogs.io is an io action game about the ultimate battle between cats and dogs.

Choose to play Cat or Dog in the eternal, global war of Cats vs Dogs! Feed and grow in size while conquering territory for your species. Use your wildly swinging claws to fight your enemies, breed to make kittens or puppies to fire at the other side, earn gold to shop for awesome claw, collar and medical perks!

Attack the rock and tree control points to claim them for your team. Control all three points on a territorial triangle to control any buildings in that area. Vet stations will help you heal if you get sick from eating enemy poops. Banks will generate gold for your team, with team leader getting a bigger cut. Spend your gold in Shops on perks and boosts.

If the other team is dominating, you need to work together closely to defend territory and claw your way back to the top! Help will be on its way in the form of a massive Top Cat or Boss Dog, impervious to doodoo, taking out control points and generally giving the leading side a giant problem!