Free For All
Moomoo.io Style
Strategy 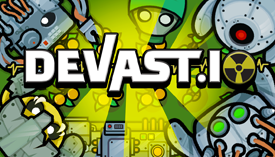 Devast.io is strategy io game where you're trying to survive with only the bare necessities. In a post-apocalyptic world, where nature takes back its rights, build a bunker, weapons, warm up and produce your own food to protect yourself from this ruthless world and the many other survivors

Start by crafting a hachet by clicking on C (the Crafting Button top left)
Unlock skills when you level up
Gather enough food to make seeds and create your own food production
Make a hat to warm up or improve your tools to make guns
Survive, and beware the radiation!

If you experiment lag, click on the low quality settings, on the setting button (the gear in the top left)

Game Updates & Patch Notes:
- NEW REPAIR LAPABOT - Repair your buildings Can defend itself only if it is attacked It would be more reasonable to keep it in your base - NEW SMALL WIRE - Use it to craft Repair Lapabot - Find it on TV's and computers in abandonned houses - NEW MUSHROOMS - The red one is poisonous and is used to craft Lapadone - The two others are edible and are used to craft Ghoul Drug - Artworks by Sushui - NEW AGITATOR - Use it to craft drugs - Inspired by Pixelbitie artwork - NEW LAPADONE - You are faster for 4 min - You become purple - Extremely addictive, once effects disappear, you see withdrawal effects: - You are slower - You have to take another Lapadone to be faster again - NEW GHOUL DRUG - Ghouls don't target you anymore - You have pustules on your face - If you attack a ghoul, it will attack you too. - To lose focus, take another ghoul drug - MORE INVENTORY : - Inventory 4 Skill gives now 2 slots instead of 1 - Inventory 5 Skill gives now 3 slots instead of 1 - Updated the UI in the main page - The RadAway is unlocked by default - Buffed tomatoes - Nerfed some recipes - Removed shaped uranium from many weapons - Removed Pumpkin Ghouls (Servers Admin can still have it) - Added statistics of the AI in commands - C4 and its trigger are now crafted with Small Wire instead of Big Wire