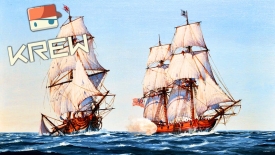 Krew.io is an awesome on the seas cannon fire game in a 3d environment. You start off on one of two teams indicated by colours and control a ship with a cannon going around destroying other ships. This game is tons of fun to play with friends or even alone as you can single handedly dismantle a fleet if you’re skilled enough. Beware however there are some AI’s roaming the sea also and they’re in huge pirate ships that require your team cooperating to take out!

To be successful in Krew.io you’re going to need to practise steering quite a bit, when I first got on the controls felt kind of weird as your move your cannon around the boat in order to direct it, doing this obviously changes where you shoot from so you need to adjust before attacking. Teamwork is crucial on the seas, a captain is only as strong as his crew after all, on that note there are infact elected captains for squads, these will be randomly chosen and replaced once the captain dies, as far as I know it doesn’t give you any other benefits other than being able to issue orders in chat.

Use the WASD keys to move your cannon around on the boat which will steer it in the direction you’re going towards and use the mouse to direct your boat/aim your cannon.