Team
Zombies
Free For All 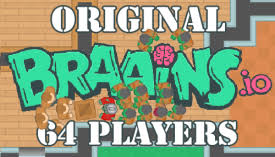 Braains.io is a team-based io game where you're either on the zombie side or human one.

As you may of guessed from the title Braains is a zombie survival game and its a bunch of fun! Each server can have up to 50 players, 1 starts as the zombie and his objectives is to spread the infections by tagging the humans. The humans objective of course have to survive the whole match duration without being tagged, its hard to out run them however so it is recommended to barricade yourself somewhere safe with other players.

Braains is an awesome io version of zombie tag, if you start as the zombie your goal is to tag humans and turn them into zombies so you’re not alone. Once you have infected others they will assist you in the hunt to infect all humans. Within the map is several buildings with entrances and debris to block those entrances with, bare this in mind and try not to accidentally doom your teammates that are sitting safely in houses with barricades as they wont be too happy. To be successful in this game teamwork is a must, if you have multiple people cooperating and blocking off an entrance you have a lot better chance of survival so bare this in mind!

Since Braains.io is a big game of tag, there is no need for attacks or any fancy powers ups, your character is controlled using the WASD keys and to tag people simply walk into them.