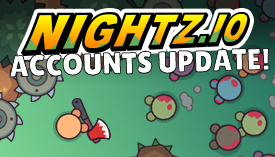 NightZ.io is a zombie survival MMO where you collect resources, upgrade your equipment, build your base and defend it against zombies.

Are you gonna fight solo or with a team? Perhaps you'll attack and loot other players! Everything is fair as long as you survive.

Collect resources, build your base, fight zombies. Defend your base against zombie hordes and other players using spikes and turrets, build creative traps, upgrade your equipment and climb your way to GLOBAL LEADERBOARDS. Is your DNA worthy of survival? You'll shape next generations.

Fight strong bosses like the Reaper to upgrade your equipment to unique variants!